Christmas Music, Part 3 – Angels We Have Heard On High

Angels We Have Heard On High 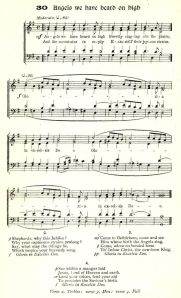 Angels we have heard on high
Sweetly singing o’er the plains
And the mountains in reply
Echoing their joyous strains
CHORUS:
Gloria, in excelsis Deo!
Gloria, in excelsis Deo!
Shepherds, why this jubilee?
Why your joyous strains prolong?
What the gladsome tidings be
Which inspire your heavenly song? ChorusCome to Bethlehem and see
Him Whose birth the angels sing;
Come, adore on bended knee,
Christ the Lord, the newborn King. ChorusSee Him in a manger laid
Jesus Lord of heaven and earth;
Mary, Joseph, lend your aid,
With us sing our Savior’s birth. Chorus

This is a traditional French carol (Les Anges dans nos Campagnes) that was translated into English by Bishop James Chadwick.

This carol commemorates the story of the birth of Jesus Christ found in the Gospel of Luke, in which shepherds outside Bethlehem encounter a multitude of angels singing and praising the newborn child.

In 2009, Andrea Bocelli and David Foster collaborated to produce a Christmas album with a number of other music legends. This is “Angels We Have Heard on High” with choir and orchestra.

The Piano Guys, Peter Hollens, David Archuleta, and The Mormon Tabernacle Choir get together to sing “Angels We Have Heard On High”

Posted by MaryO on December 3, 2015 in Christmas Music, Holidays, Music, Posts of Interest