RSS
← The Heavens are Telling
The Organ ~ Chuck Knows Church → 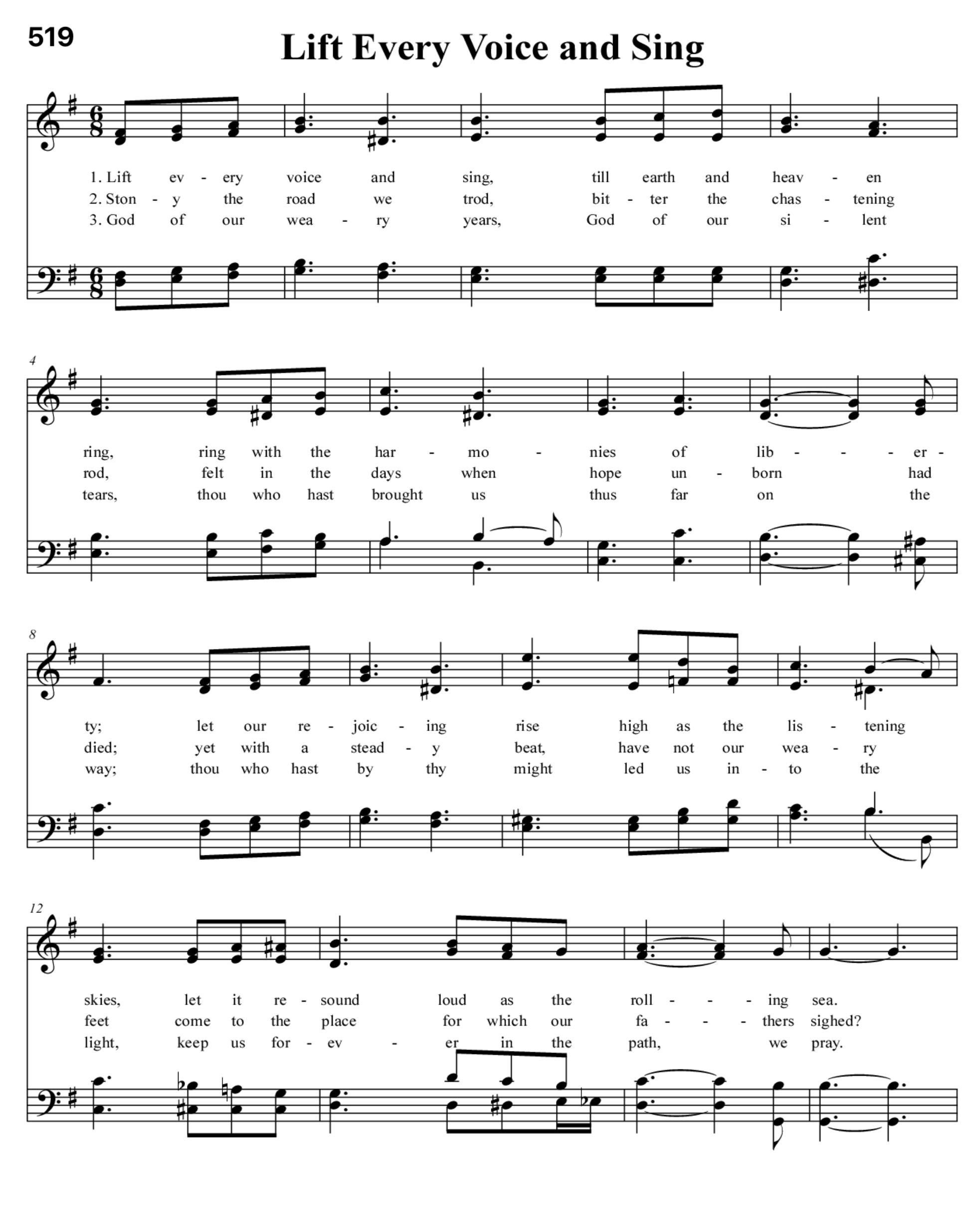 “Lift Every Voice and Sing”
James Weldon Johnson
The United Methodist Hymnal, No. 519

Pender pianist, Liz Eunji Moon played Lift Every Voice and Sing for the postlude on Martin Luther King Holiday weekend. “Lift Every Voice” began as a hastily-written composition for an unassuming school assembly in 1900, but has become the African-American national anthem.

Lift every voice and sing,
Till earth and heaven ring,
Ring with the harmonies of liberty;
Let our rejoicing rise
High as the listening skies,
Let it resound loud as the rolling sea.

Few hymns have the capacity to define the identity of an entire group. “Lift Every Voice” began as a hastily-written composition for an unassuming school assembly in 1900, but has become the African-American national anthem.

James Weldon Johnson (1871-1938) received degrees in literature from Atlanta University in 1894, with a master of arts in 1904. He had a versatile career as a writer, teacher, diplomat and lawyer, becoming the first African-American to pass the bar in the state of Florida. His diplomatic posts took him in 1906 to Puerto Cabello, Venezuela, and in 1909, to Corinto, Nicaragua, where he served as the American consul.

His most prominent leadership role was as the executive secretary of the National Association for the Advancement of Colored People (NAACP), a position that he assumed in 1920.

Johnson had been asked to speak by the principal of a school in Jacksonville, Fla., his hometown, for an observance celebrating the birth of Abraham Lincoln. Rather than make a speech, he decided to write a poem. As the time drew near, his plans changed from a poem to a song. James turned to his brother J. Rosamund Johnson (1873-1954) to compose music for his text.

Even though the Johnsons’ New York publisher did not actively promote the song, children throughout the South kept it alive. The song gathered momentum, as it became known around the country.

Though the brothers wrote over 200 songs together, mostly for the stage, “Lift every voice” had an exceptional place in their musical collaborations. James noted in 1935, “The lines of this song repay me in elation, almost of exquisite anguish, whenever I hear them sung by Negro children.”

Gene Logan, a member of Ebenezer UMC in Jacksonville, Florida, connects the Johnson brothers with the Methodist Church: “James and his brother Rosamond became members of Zion Episcopal Methodist Church where their mother served as choir director and the young men served as musicians. The church was renamed Ebenezer United Methodist Church, which is now located at 9114 Norfolk Blvd in Jacksonville, Florida.” According to columnist Sharon Coon in Florida, their mother, Helen, “was the first Black female public school teacher in Florida. She taught at Old Stanton School on Ashley Street in Jacksonville, FL. His mother taught both James and J. Rosamond music and reading.” After receiving his degree from Atlanta University, James returned to the school where his mother taught as Principal in 1894. The brothers’ connections to the Methodist Church and their rearing by a nurturing and courageous mother surely contributed to their accomplishments.

The NAACP adopted “Lift every voice” as its theme song. Julian Bond, former NAACP chairman, stated that the song holds deep meaning for the Civil Rights Movement: “When people stand and sing it, you just feel a connectedness with the song, with all the people who’ve sung it on numerous occasions, happy and sad, over the 100 years before.”

This hymn, often called the “Negro National Anthem” or “Black National Anthem,” gave hope to many during the Civil Rights Era. Its centrality in African-American life may be illustrated by a childhood memory of Vernellia Randall, a law professor at the University of Dayton, who grew up in Texas. She recalls starting each day in her school in the 1950s and 1960s with The Lord’s Prayer, The National Anthem, and the Negro National Anthem.

Wendell Whalum, the late choral director at Atlanta’s Morehouse College, often spoke of the progression of the three stanzas as that of praise, lament, and prayer. The opening stanza is a resounding hymn of praise full of rich metaphors such as the “harmonies of liberty” and rejoicing “loud as the rolling sea.” The second stanza is a lament that recounts the price of liberty:

Stony the road we trod,
bitter the chastening rod,
felt in the day when hope unborn had died.

The sting of these words echoes Psalm 130, “Out of the depths have I cried unto thee.” Yet the poet does not leave us here long. By the end of the stanza, we are singing with hope,

Out of the gloomy past,
till now we stand at last
where the white gleam of our bright star is cast.

The final stanza is often referred to as a prayer in the African-American community. This prayer culminates with the petitions, “keep us forever in the path, we pray” and “may we forever stand true to our God, true to our native land.”

Is this a hymn just for African-Americans or is it for all people? Dr. James Abbington, Associate Professor of Music and Worship at Emory University’s Candler School of Theology, Atlanta, Georgia, and a scholar in African American hymnody, provides an answer to this question: “Several years ago, I was invited to organize and conduct a 1,000-voice choir for the annual Detroit Branch NAACP Freedom Fund Dinner at Cobo Hall. It was during the time of the Persian Gulf War and tensions were very high between the Jewish and Arab communities in the city.?rel=0″The 1,000 voice choir, accompanied by the Detroit Symphony Orchestra, was made up of Anglo-Americans, Canadians, Native Americans, Koreans, Italians, Jews, Arabs, African-Americans and others, and ‘Lift Every Voice and Sing’ was one of the selections for that occasion. After the first rehearsal Jewish, Korean, and Native American members of the chorus approached me and said, ‘This song isn’t just for African-Americans and people from Africa, it belongs to all of us who are ‘true to our God and true to our Native land.'”?

On May 20, 2018, the National Association for the Advancement of Colored People (NAACP) attended The Tabernacle Choir’s weekly Music and the Spoken Word broadcast. Members of the National Board of Directors of the NAACP and the NAACP Foundation were in Salt Lake City for their board meetings, which were held in Salt Lake City for the first time. They also met with the First Presidency of The Church of Jesus Christ of Latter-day Saints and made a joint statement to the media calling for “greater civility and racial harmony.”

← The Heavens are Telling
The Organ ~ Chuck Knows Church →