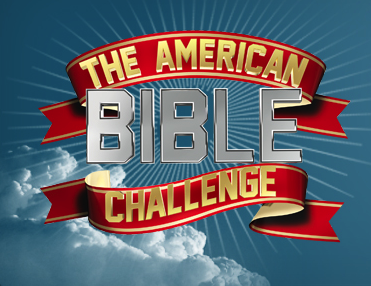 If the entertainment business is any indication, interest in the Bible remains strong. There’s the record-breaking History Channel miniseries The Bible. Then there was the Son of God movie.  And the Noah film. Now another TV show is taking its inspiration from the Bible. But this time, it’s a game show.

The American Bible Challenge kicked off its third season on the Game Show Network last month. The biblically-themed trivia show became the network’s highest viewed program of all time when it premiered in 2012, drawing more than two million viewers.

Hosted by comedian Jeff Foxworthy and Grammy Award-winning musician Kirk Franklin, The American Bible Challenge is a “fun, spirited game show that celebrates the Bible, its teachings, relevance and place in American culture.” Contestants answer questions about the Bible, competing to win $20,000 for charity.

Posted by MaryO on July 21, 2014 in Books of The Bible, Posts of Interest, The Holy Bible