Cushing's and kidney cancer (renal cell carcinoma) patient, founder, owner and webmaster of Cushing's Help and Support, web designer, piano teacher and mom. I am a Cushing's patient who has dealt with Cushing's symptoms since 1983 (or earlier) and the aftereffects of pituitary surgery since 1987. Because I had very little support for my symptoms, diagnosis and surgery, I decided to try to make things a little better for other patients and started a support site called Cushing's Help and Support in 2000. The site has grown to astronomical numbers. This disease isn't as rare as doctors have told us! In 2006, I was also diagnosed with kidney cancer (renal cell carcinoma). My left kidney and adrenal gland were removed. Having an adrenal gland removed complicates my post-Cushing's symptoms. I am not planning to have any more rare and unusual diseases. My entire bio to date can be found here: http://www.cushings-help.com/maryos_story.htm But, enough of that - it's not always about Cushing's, or even Cancer. This one is about Life!

Hymn History: How Great Thou Art

A favorite hymn is How Great Thou Art

“Great is the Lord, and greatly to be praised, and His greatness is unsearchable.” Psalm 145:3

“How Great Thou Art” is a Christian hymn based on a Swedish poem written by Carl Gustav Boberg (1859–1940) in Sweden in 1885. The melody is a Swedish folk song.  Its popularity is due in large part to its wide use by gospel singers, notably George Beverly Shea of the Billy Graham Evangelistic Team.

The original Swedish text was a poem entitled “O Store Gud.” written by a Swedish pastor, the Reverend Carl Boberg, in 1886. In addition to being one of the leading evangelical preachers of his day. Boberg was also the successful editor of the periodical Sanningsvittnet. His inspiration for this text is said to have come from a visit to a beautiful country estate on the southeast coast of Sweden. He was suddenly caught in a midday thunderstorm with awe-inspiring moments of flashing violence, followed by a clear brilliant sun. Soon afterwards he heard the calm, sweet songs of the birds in nearby trees. The experience prompted the pastor to fall to his knees in humble adoration of his mighty God, He penned his exaltation in a nine-stanza poem beginning with the Swedish words “O Store Gud, nar jag den varld beskader.”

Several years later Boberg was attending a meeting in the Province of Varmland and was surprised to hear the congregation sing his poem to the tune of an old Swedish melody. It is typically characteristic of many other hymn tunes, i.e., “Day by Day” with its lilting, warm, singable simplicity.

With his original English lyrics and his arrangement of the Swedish folk melody, Mr. Stuart K. Hine published what we know today as the hymn “How Great Thou Art.” Assignments of copyrights and publication rights to an American publishing firm in 1954 helped spread the popularity of this hymn. In April of 1974 the Christian Herald magazine, in a poll presented to its readers, named “How Great Thou Art” the No. 1 hymn in America.

How Great Thou Art

Verse 1:
O Lord my God, When I in awesome wonder,
Consider all the worlds Thy Hands have made;
I see the stars, I hear the rolling thunder,
Thy power throughout the universe displayed.

Verse 2:
When through the woods, and forest glades I wander,
And hear the birds sing sweetly in the trees.
When I look down, from lofty mountain grandeur
And see the brook, and feel the gentle breeze.

Verse 3:
And when I think, that God, His Son not sparing;
Sent Him to die, I scarce can take it in;
That on the Cross, my burden gladly bearing,
He bled and died to take away my sin.

Verse 4:
When Christ shall come, with shout of acclamation,
And take me home, what joy shall fill my heart.
Then I shall bow, in humble adoration,
And then proclaim: “My God, how great Thou art!”

Apportionments. In the United Methodist Church your gifts to your congregation impacts not only your local church’s ministries, but mission and ministry around the world. Chuck explains a little about apportionments.

Posted by MaryO on January 26, 2023 in Chuck Knows Church, Videos

Hymn History: We’ll Understand It Better By and By

We are tossed and driven
on the restless sea of time;
somber skies and howling tempests
oft succeed a bright sunshine;
in that land of perfect day,
when the mists have rolled away,
we will understand it better by and by.

Often referred to as “The Prince of Preachers”, he educated himself, became a minister and founded one of the largest Methodist congregations serving the African-American community on the East Coast of the United States.

He was one of the eminent preachers of Methodism at the turn of the twentieth century. Hymnologist James Abbington has called Tindley a “pastor, orator, poet, writer, theologian, social activist, ‘father of African American Hymnody,’ ‘progenitor of African American gospel music’ and ‘prince of preachers.'”

The Rev. Carlton Young notes “We’ll Understand It Better By and By” was “one of eight hymns . . . written during a difficult period in Tindley’s life.”

One can imagine Tindley using this song to punctuate his sermons, offering hope to those assembled not only through exegesis of the biblical text, but also through a lyrical sung theology.

From “The Lawrence Welk Show,” Gail, Rod, and Michael are featured in this great Gospel song found in the United Methodist Hymnal (page 525). Join with them in song as they encourage every Christian: “WE’LL UNDERSTAND IT BETTER BY AND BY”

Posted by MaryO on January 26, 2023 in Hymn History, hymns, Posts of Interest, Videos

Hymn History: I Want to Walk as a Child of the Light 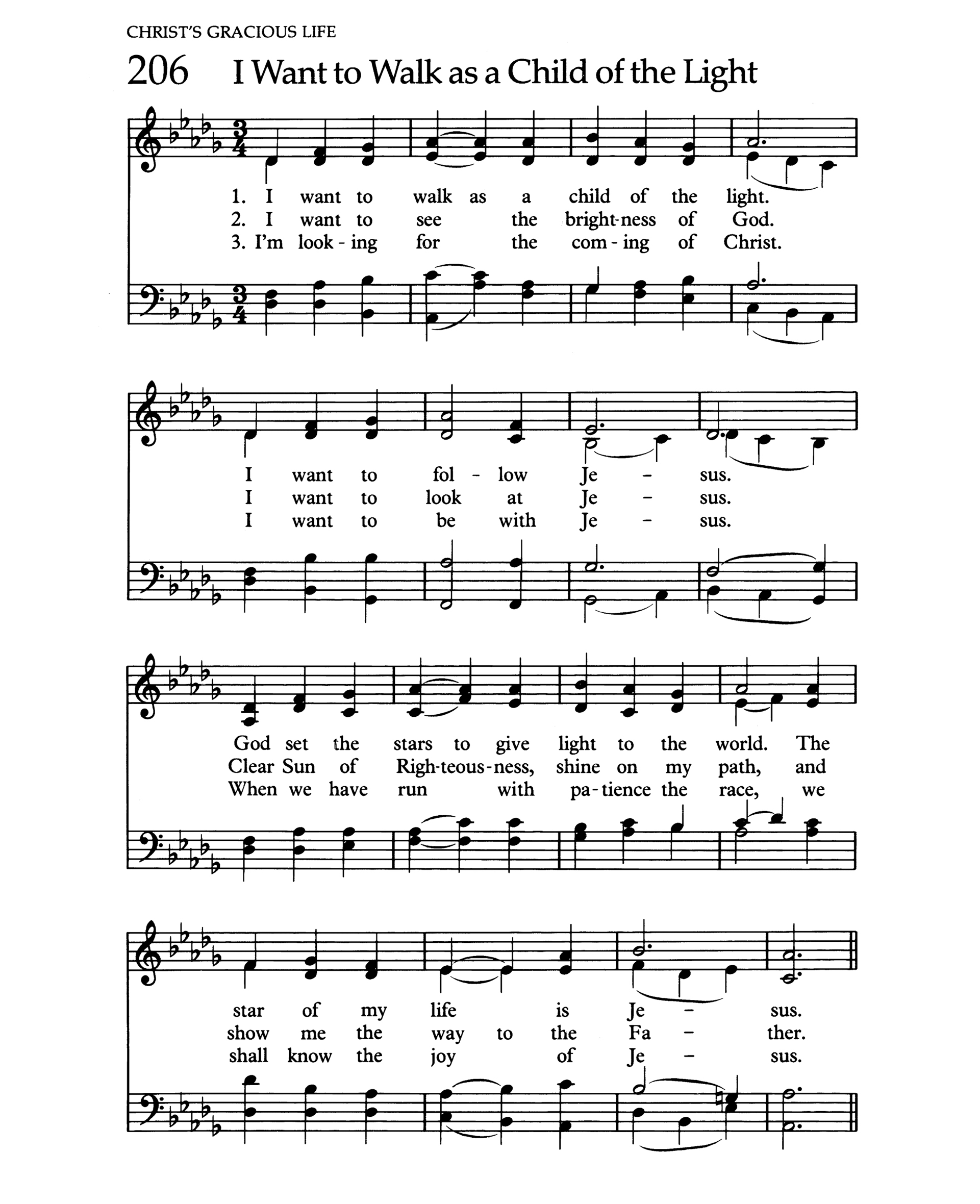 “I Want to Walk as a Child of the Light” by Kathleen Thomerson,
The United Methodist Hymnal, No. 206

The Pender UMC Traditional Service Opening Hymn “I Want to Walk As a Child of the Light” on Sunday September 18, 2022 was played by Liz Eunji Moon on piano, accompanied on guitar by Brian Stevenson and AJ Rios and sung the Pender Sanctuary Choir and congregation.

I want to walk as a child of the light.
I want to follow Jesus.
God set the stars to give light to the world.
The star of my life is Jesus.
Refrain: In him there is no darkness at all.
The night and the day are both alike.
The Lamb is the light of the city of God.
Shine in my heart, Lord Jesus.*

From time to time, a hymn captures our imagination because of its simplicity and transparency. Such a hymn is “I want to walk as a child of the light.” In singing this hymn, we feel the spirit of Epiphany unfold.

Kathleen Armstrong Thomerson (b. 1934) is a native of Tennessee. She wrote the hymn during the summer of 1966 during a visit to the Church of the Redeemer in Houston, Texas, the location providing the origin for the tune name HOUSTON. Her musical education took place at the University of Texas and Syracuse University, with additional studies at the Flemish Royal Conservatory in Antwerp. She has studied with several of the most noted organists of the twentieth century.

Ms. Thomerson directed music at University United Methodist Church in St. Louis and was on the organ faculties of St. Louis Conservatory and Southern Illinois University in Edwardsville. From 2004 through 2013, she served Mt. Olive Lutheran Church in Austin, Texas. In addition to this hymn, she contributed tunes for hymns by Patricia B. Clark in their joint collection, A Taste of Heaven’s Joys: A Collection of Original Hymns (2005).

“I want to walk as a child of the light” comes to The United Methodist Hymnal by way of the Episcopal Hymnal 1940 supplement, Songs for Celebration (1980). A musician with such a distinguished musical pedigree does not usually compose a gospel hymn of such elegant simplicity. A folk-like melody conveys a text based upon a wide range of scriptural allusions and biblical images. United Methodist Hymnal editor, Dr. Carlton Young notes some biblical passages that support the text: Isaiah 42:6c, “I have given you as a covenant to the people, a light to the nations.”; Malachi 4:2, “But for you who revere my name the sun of righteousness shall rise, with healing in its wings”; Revelation 21:25b, “And there will be no night there,” and 22:5b, “They need no light of lamp or sun.”

“I want to walk as a child of the light” communicates deep conviction and personal sincerity, while avoiding any hint of pretence. The first person perspective invites the singer to join Christ, the Light of the World, in discipleship – a journey of faith. The second line of each stanza deepens this commitment:
Stanza 1: “I want to follow Jesus.”
Stanza 2: “I want to look at Jesus.”
Stanza 3: “I want to be with Jesus.”

From a Wesleyan perspective, the theology of this hymn outlines sanctifying grace, the perspective of the Christians as they move toward perfection in the faith, becoming transformed in the image of Christ. Each stanza adds greater luminosity to this walk. In the first stanza, “God set[s] the stars to give light to the world.” Christ in turn becomes the “star of my life.” References to stars support the hymn’s appropriateness for Epiphany. Stanza two expresses the desire to “see the brightness of God.” The “Sun of Righteousness” illumines “the way to the Father.” The final stanza extends the journey toward the “coming of Christ,” an eschatological direction toward our future hope.

As in most gospel hymns, it is the refrain that carries the essence of its meaning; and indeed it is this refrain, with its scriptural allusions that virtually quote from Revelation 21 and 22, that distinguishes this hymn from many earlier expressions of discipleship. While a deeply personal expression of piety, the poet roots her devotional expression firmly in Scripture, avoiding the maudlin and simplistic notions of some gospel songs.

The simplicity of the music and text does not imply a simplistic faith. “I want to walk as a child” reminds us of one of the paradoxes of our faith, that we need to become as a child to fully understand the realm of God (Matthew 18:2-4).

Got pipes at your church? How ’bout an electric organ? No? What about a praise band? No matter, the organ has a rich tradition in the Christian Church?

And Chuck will give you some valuable information about the organ and a few chuckles along the way.

Posted by MaryO on January 18, 2023 in Chuck Knows Church, Videos