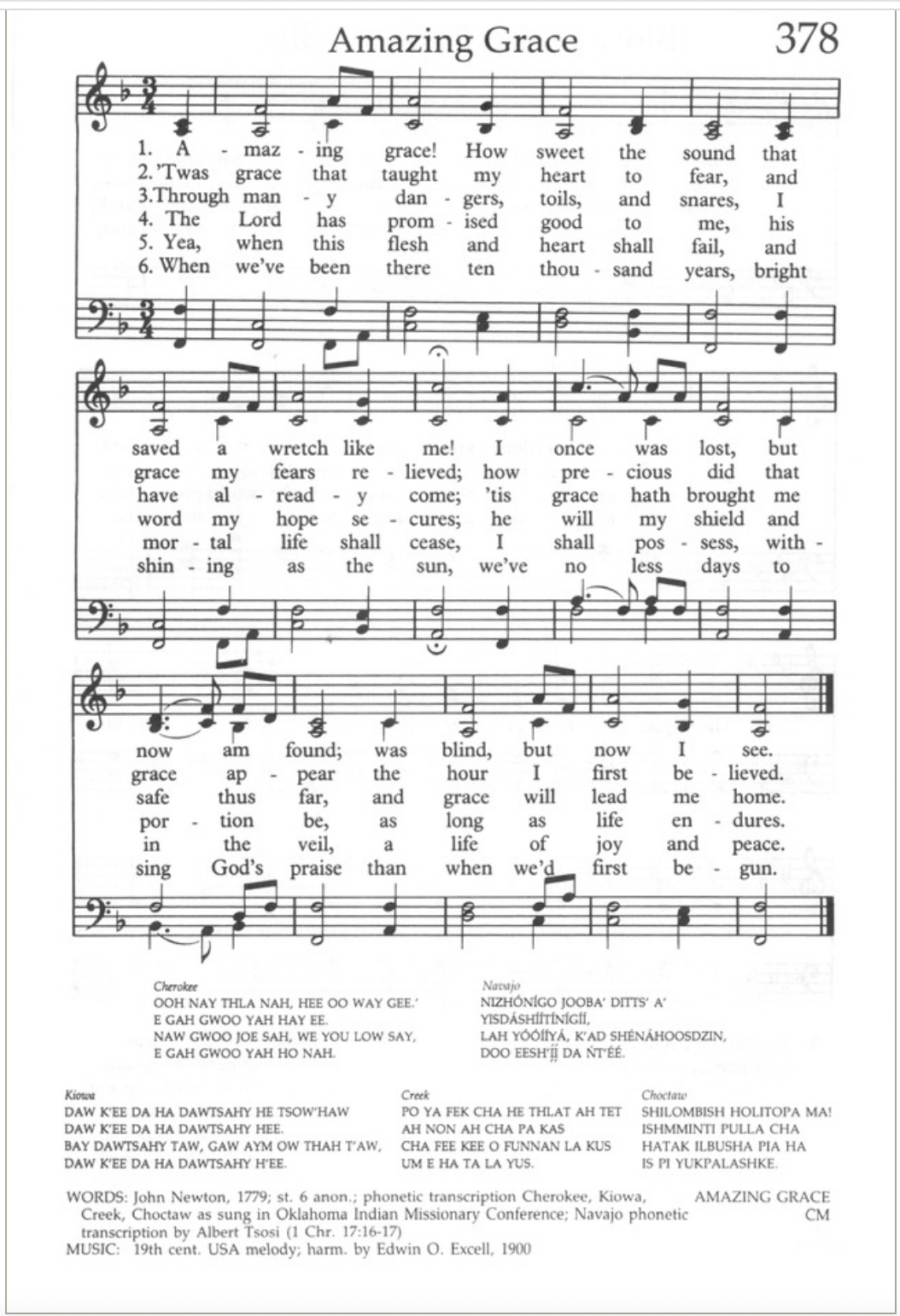 December 1772 in Olney England John Newton began the writing a hymn that would grow increasingly more popular over the years.

In his hymn, “Amazing Grace,” Newton writes about a grace that is immense and one that saved himself out of his wretchedness. By looking within the hymn “Amazing Grace,” one is able to understand a little bit about Newton’s personal conversion

Newton grew up with both his parents, however, his mother died while his father was away at sea. Newton’s father remarried and the couple had another child. Following in his father’s footsteps, Newton began his life’s career by searching throughout the African coast for slaves to capture and eventually to sell for profit.

On one journey, Newton and his crew encountered a storm that swept some of his men overboard and left others with the likelihood of drowning. With both hands fastened onto the wheel of the boat, Newton cried out to God saying, “Lord, have mercy on us.” After eleven hours of steering, the remainder of the crew found safety with the calming of the storm. From then on, Newton dated March 21 as a day set aside for a time of humiliation, prayer, and praise.

Upon arriving safely home, Newton did not venture out to seek more slaves, instead he began to learn Hebrew and Greek. He occasionally accepted requests to speak about his conversion in front of various congregations. Newton was eventually ordained and began to lead his own church. God changed him from a man who was an advocate for the slave trade to a man actively working towards abolishing it. Newton’s literary work against the slave trade encouraged abolitionist William Wilberforce to continue his legal fight against slavery in England.

In later years, Newton began to lose his memory. Although his thoughts were limited, Newton said he could remember two things, “That I am a great sinner, and that Christ is a great Savior.” With this conviction of newly found life that he found only in Christ, Newton passed from his earthly life in 1807, at the age of 82. Newton did live long enough to see the signing of The Act for the Abolition of the Slave Trade.

The hymn appeared in the colonies later accompanied with a different tune, more commonly known as “New British.” It grew in popularity, but not because it was catchy tune, but because the words that Newton wrote related to every human being who encountered the saving grace of Jesus Christ and touched many people at various stages of their spiritual walks.

Since the day that Newton penned the lyrics to “Amazing Grace,” it has grown in popularity and has been present at numerous key moments in our country’s history. Newton experienced the darkness and hopelessness of his sin and the consequence of following his own corrupt ways. He focused on fulfilling what he wanted to do in his life instead of looking to the direction of God.

“Amazing Grace” speaks of the sweetness found in Christ’s grace for his children. As humans we are lost, blind in sin, and need saving. Jesus’s saving grace is amazing!

In his later years, Newton became the pastor of a larger church in London, where he helped lead many people to the God he had once mocked. He was also active in the movement to abolish the British slave trade. When the prime minister appointed a committee to investigate the slave trade, Newton was a key witness. He explained the horrors of the “industry” from the inside out. His compelling testimony helped make the slave trade—and eventually slavery—illegal.

Did you know John Wesley had two birthdates?

Wesley was born on June 17, 1703, while England was using the Julian calendar.

When they adopted the Gregorian calendar in 1752, Wesley’s birth date became June 28.

He has taught courses for Bible Colleges, and he also speaks in churches and at conferences.

Al and his wife Duke live in Sterling, Virginia where they are active in local outreach to the young Hispanics in their community.  He shared his passion for missions with us.

Listen to other sermons in the Pender Podcast series.

Posted by MaryO on April 10, 2013 in Get Involved!, Missions, Pender UMC, Sermon

April 7 – A guest preacher, Al Butkovich, will be our special pre-missions conference speaker.

Al began working with Ambassadors for Christ International (AFCI) in 1995. Since joining AFCI, Al has ministered in Ghana, Philippines, England, Spain, Croatia, Fiji, Tonga, Saint Vincent and Cambodia. He has taught courses for Bible Colleges, and he also speaks in churches and at conferences.

Al and his wife Duke live in Sterling, Virginia where they are active in local outreach to the young Hispanics in their community. He will be sharing his passion for missions with us.